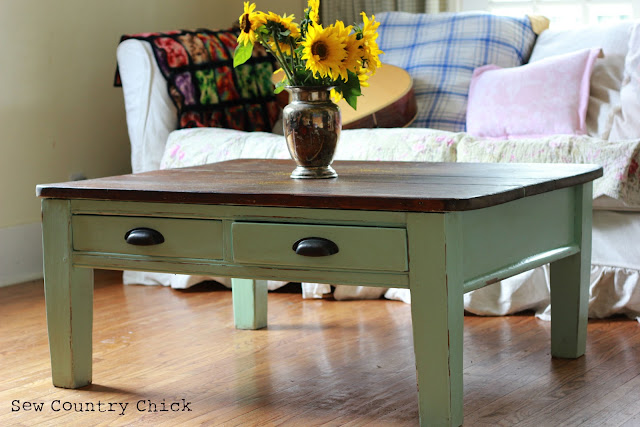 This is humbling experience of the week number two….
I love how my aqua turquoise table turned out in the end but I took a few wrong turns getting there. 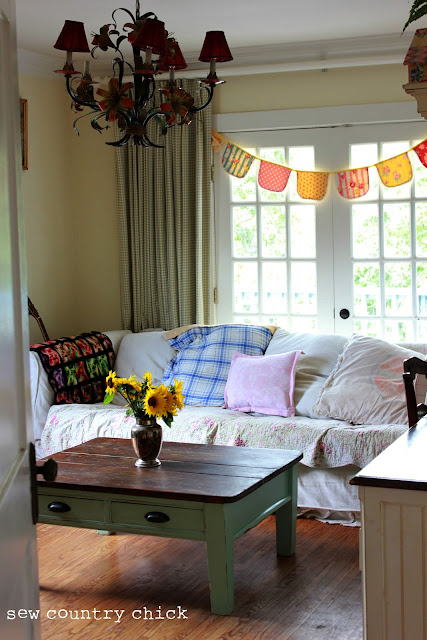 I had an old, unfinished pine coffee table in my TV room for the longest time….
Because it was unfinished, there were crayon marks, stains and all sorts of gunky things collected in the cracks.
After about three years of looking at this sad little table and trying to remove staining spills from my kids who totally abused it, I decided to something about it….
Because that’s how I roll when it comes to home DIY projects.
Slow and steady wins the race.
This tutorial has some tips telling you what NOT to do as well as what to do. 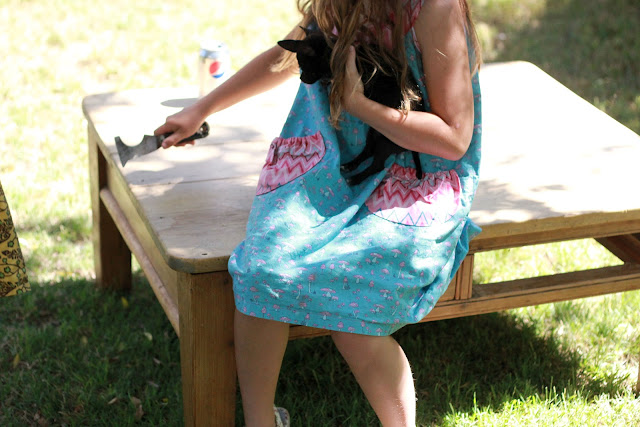 For instance,
Don’t paint water based paint over oil based primer. 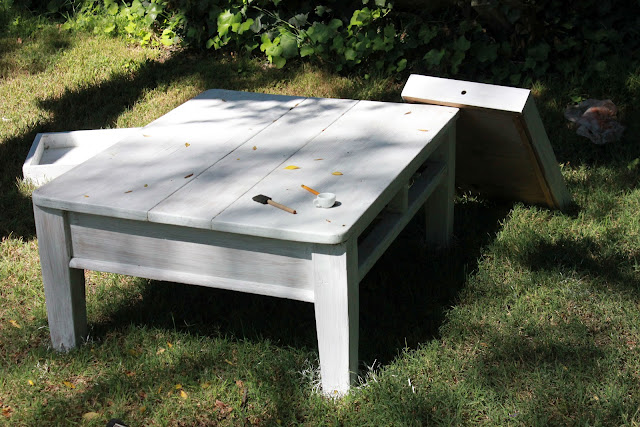 Don’t listen to the guy in the paint store who tells you water based paint adheres just fine to oil based primer.
It doesn’t.
It didn’t make sense to me but I went ahead and followed the guys instructions.
He was an older fellow who looked to be very knowledgeable in all things painting related……. 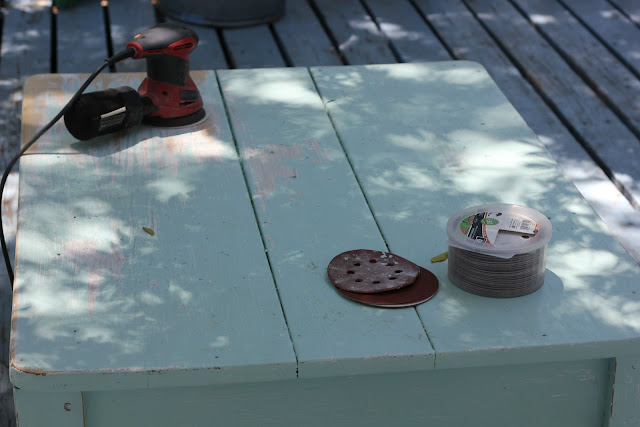 After sanding the table andpriming it,  this was what happened after I painted on top of the oil based primer:
The paint peeled off like cheap nail polish, just as I suspected it would. 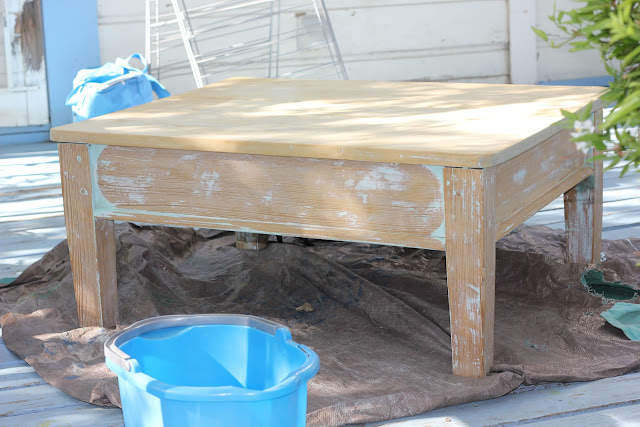 What was supposed to be a simple DIY project turned into a few days work…
I had to sand all of the paint off the entire piece with my orbital sander.
I started again….. 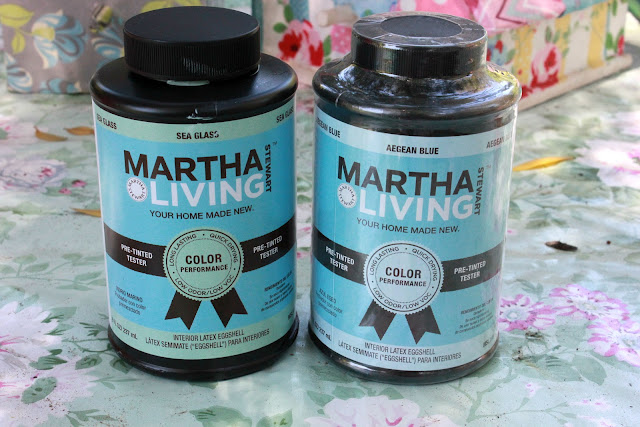 This time I didn’t prime the piece at all.
I painted it with a mixture of two colors of paint from Martha Stewart.
Sea Glass and Aegean Blue.
I used two small sample bottles for this project.
BTW sample size paints are often the perfect amount for smaller projects…
I left the top of the table unfinished because I was going to stain it later. 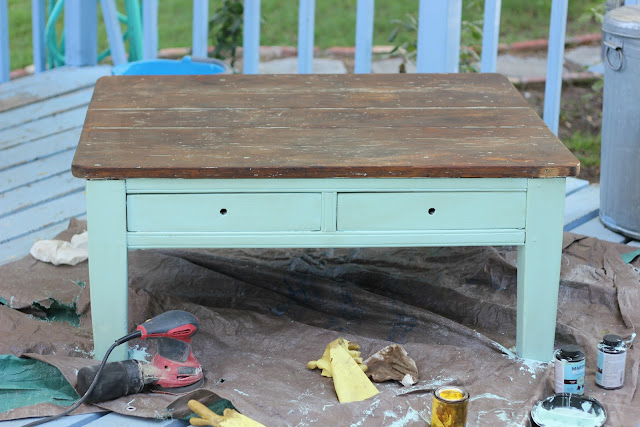 Then I sanded the edges of the blue painted parts lightly.
I rubbed some stain from MInWax in the Provencal shade into the sanded parts to make the piece look weathered.
Then I stained the top the provencal color. 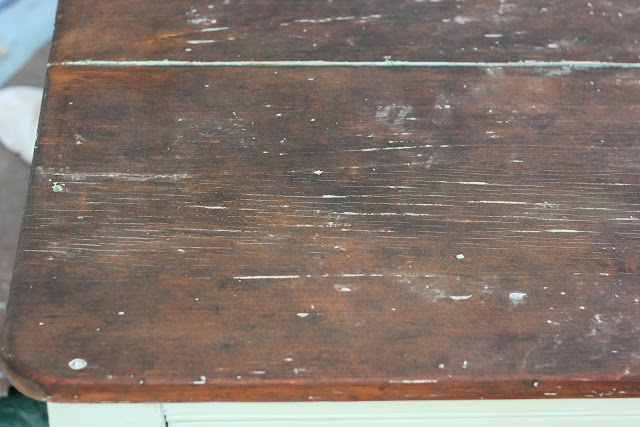 There were little specks that I couldn’t remove from the primer I had painted on the top before. I was told they gave the piece character so I just left them alone.
I finished the piece with a couple of coats with Minwax rub on polyurethane varnish. 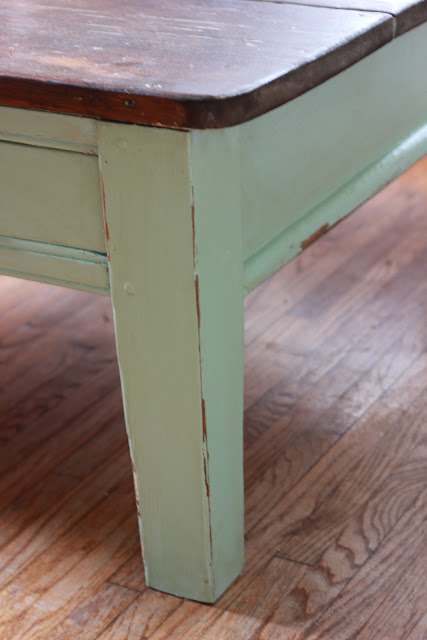 We lost the knobs that came with the table a long time ago.
So I bought some bin pulls at the nearby Restoration Hardware outlet for 4 dollars each.
The total cost of refinishing this piece?
About twelve dollars. 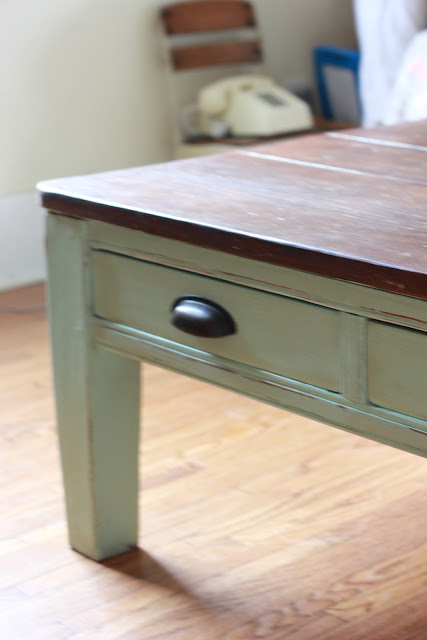 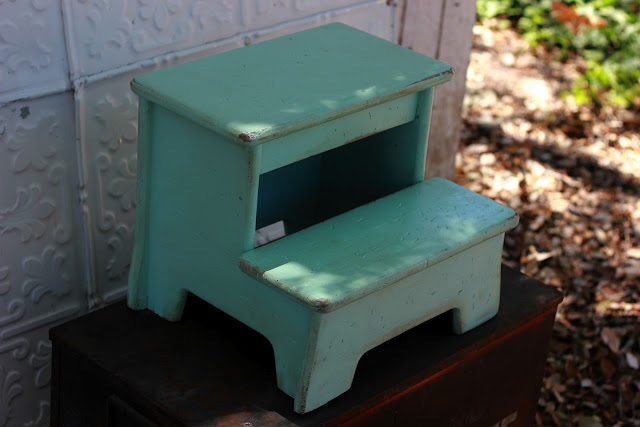 I had a little paint left over so I painted this step stool too.