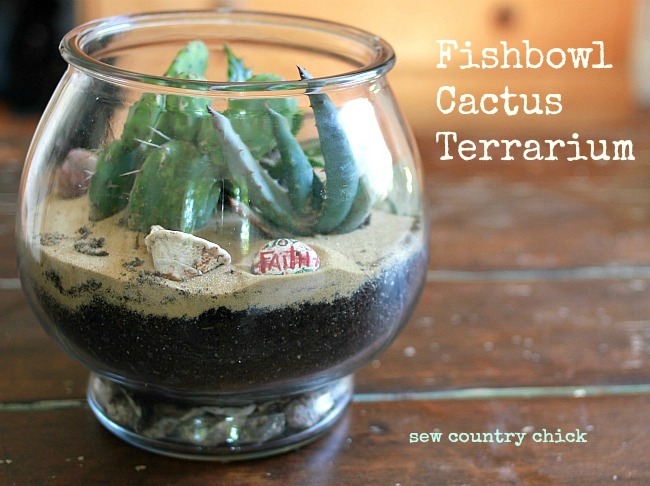 The coffee table in the den was empty and needed something on it.
We haven’t had the best luck with goldfish so there was an old fishbowl in the garage.
For several months I had been meaning to make a cactus terrarium like one I saw at Anthroplogie last summer.
Well, I finally got around to it! 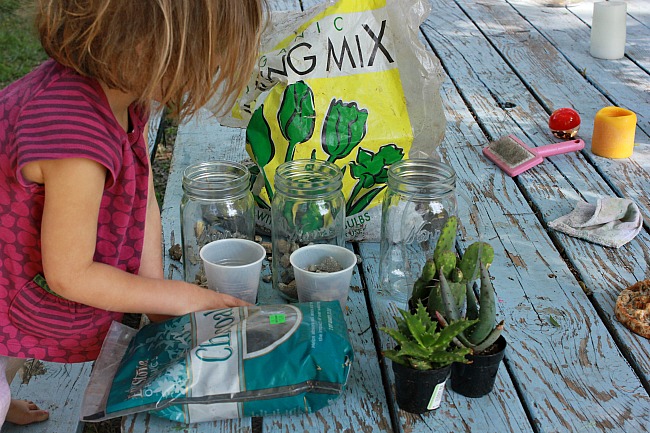 It’s so simple and I used things I already had lying around since my husband is a gardener. I bought three little cactuses at the home center.
Here is what you need for a cactus fishbowl terrarium:
An old fishbowl. Check the thrift shop.
Some rocks.
Some gardener’s charcoal. It prevents mold.
Some potting soil.
Some sand.
Some little cactus plants.
To assemble:
Layer rocks and charcoal on bottom of bowl
Put some potting soil in.
Put plants in bowl.
Cover with a little more potting soil.
Cover with a little sand to look deserty.
Throw some seashells in if you have any!
Although I live on a small farm, I am really terrible at gardening.
I LOVE planting things but often forget to water and forget about weeding.
On the other hand, my husband is a dedicated and talented gardener, and we reap the bounty of his harvests.
Roses, lettuces, tomatoes, fruit trees, strawberries, cactuses….
There isn’t anything that doesn’t thrive under his watchful eye.
He actually spent nine hours in the garden last Saturday!
So he chuckled when he saw my cactus terrarium.
“I hope those cactus can survive….” he said.
“Just don’t over water them. Once a week or maybe even once every two weeks. Make sure you only sprinkle them as there is no drainage in the bowl.”
When it comes to anything growing I will take his advice.
And so should you!

Building a stone patio in the secret garden : Part one