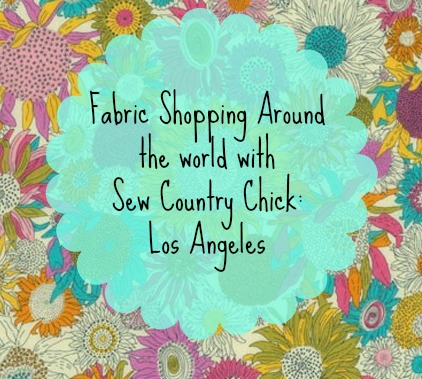 Welcome to my Fabric Shopping Around The World Series!
This week I am reposting some of my favorite fabric shopping trips I have blogged about.
Today we’ll start off in my hometown of Los Angeles!
This post is focusing on the shops in Downtown LA only. I will be writing another post son focusing on the west side of LA, including Mood fabrics and Sew LA. 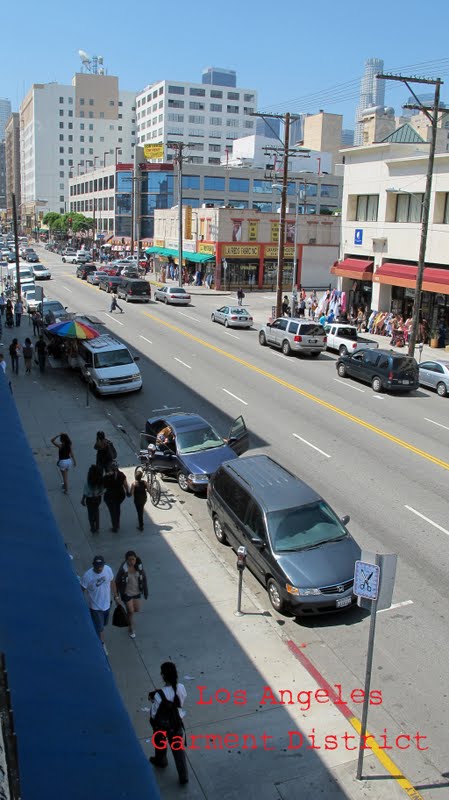 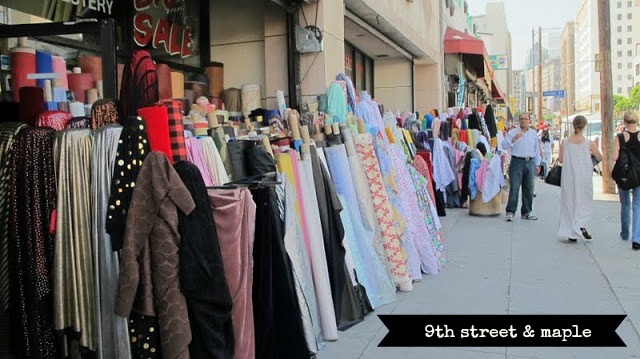 I have been shopping for fabric in downtown Los Angeles since I was a student it FIDM years ago. Unlike most neighborhoods in LA which are always being revamped, this little slice of the downtown area hasn’t changed much. It’s bordered bordered by Skid Row, a rundown area to the south, which has been cleaned up a bit by the new loft boom, industrial warehouses to the east, the Staples Center to the west, and the low budget knock off shopping district known as “The Alley” on it’s southwest side.
You can find the fabric district on South 9th Street between Wall and Maple streets. Small shops spill of into the surrounding streets that fall in between Maple and Wall.
Now I digress…
They have the best hot dogs in the world there. 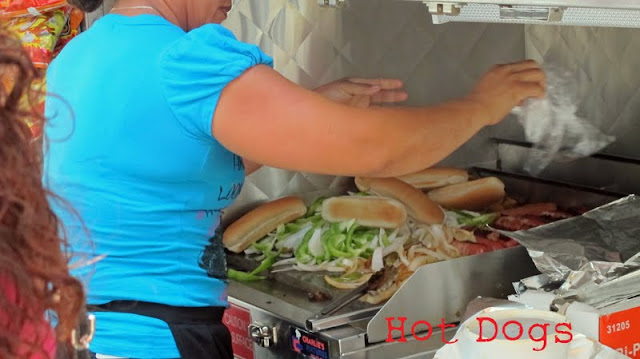 Street vendors wrap them with bacon, grill them, and top them with grilled onions and peppers, adding a flourish of avocado salsa mixture topped with mayonnaise and ketchup. It alone almost makes the drive there worth it, AND the hot dogs are only three dollars. 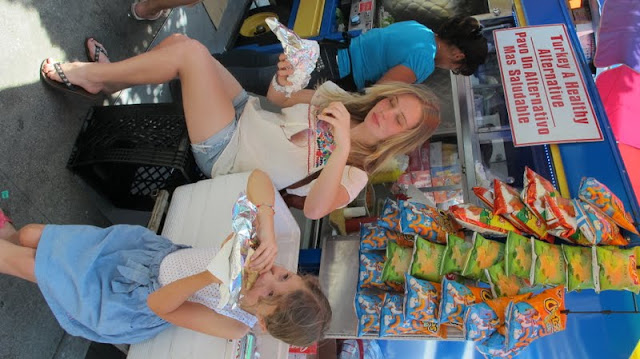 Most of the shops are small mom and pop operations run by Middle Eastern folks. Bargaining is fine, especially if you are buying more than two yards of fabric. If you find something you like at a good price you should buy it because usually once it it gone, often that’s it.
Most shops are jobbers which mean they buy up extra fabric from manufacturing houses. I have seen expensive top designer fabrics in the same shop as cheap polyesters. Many of the shops have really low quality fabrics and you have to look carefully. Here are a few places I would recommend for you to look:
Micheal Levine
919 Maple Street
If you have never been downtown you should start here. It’s more expensive than the small shops but it is huge and has an exhaustive selection of fabrics, trims, notions, and knitting supplies. There is also a well stocked home decorating branch across the street. You can find top quality dress and home decorating fabrics at Micheal Levine and it is still less expensive than the pricier fabric stores like Mood and International House Of Silks and woolens on the pricier westside of LA.
I have to admit that since originally writing this post Micheal Levine had become a sponsor to this blog and they now have an online shop called Low Price fabric. You can get the discount code on my sidebar! 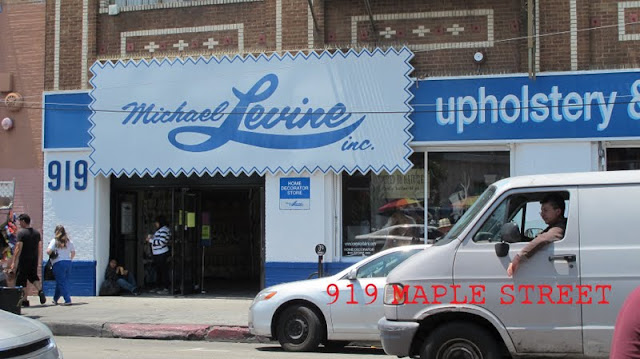 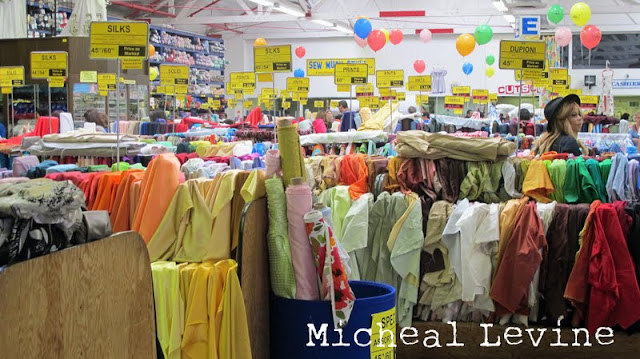 A little further South on 9th Street are some amazingly well stocked trim shops. If you don’t shop with a list it can be overwhelming and your head can start spinning while taking in all the beautiful and exciting trims. 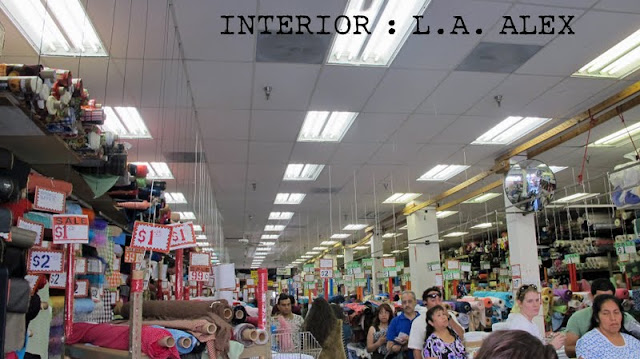 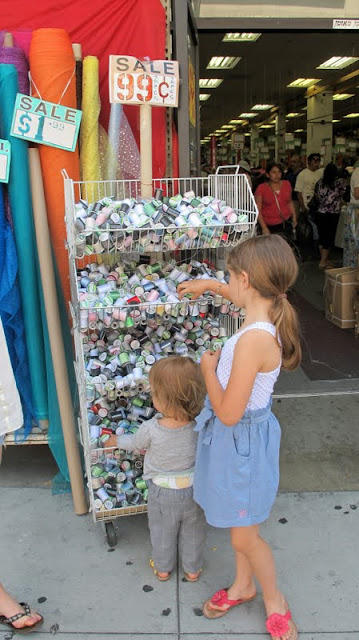 L.A. Alex
416 9th Street
Like Micheal Levine, LA Alex is one of the larger stores in downtown.
A giant bargain basement with dress, home fabrics, notions, and trims.
I can remember getting home once from a trip downtown and realizing I had forgotten to buy an item I had gone for, having instead been seduced and sidetracked by other more colorful and interesting prospects. Zippers, flowers, studded trims, feathered trims, jeweled trims, laces, beads, velvets, colored hooks and eyes, grommeted trims. It’s like being a kid in a candy store!
I would advise you bring your list. 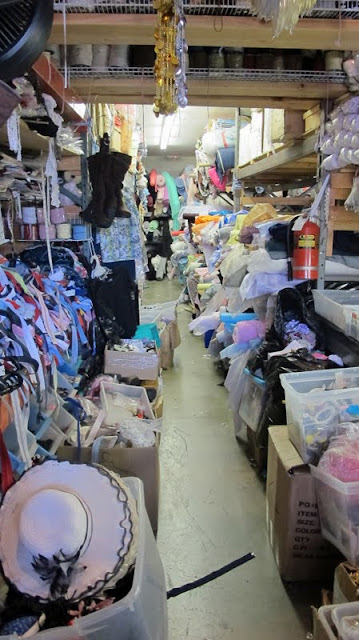 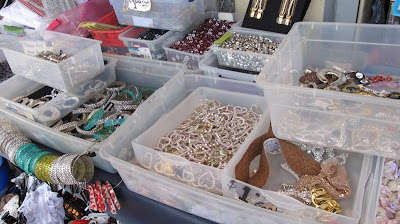 FIDM Scholarship Store
919 South Grand Avenue
Another place to stop when you are in the area is the Scholarship store of FIDM. Some beautiful fabrics and trims can be found there for one to two dollars a yard if you are lucky! I bought about 25 yards of some beautiful delicate lace trim for only six dollars once. Like most bargain fabric stores in the downtown area, shopping there is hit or miss. Manufacturers in the area donate their unused fabrics to FIDM and the sales go to support the Scholarship fund there.
At FIDM, there is also a wonderful bookstore, and a small but interesting fashion museum on the premises. Some of their displays in the past have been costumes from Mad Men, and Tim Burtons’ Alice in Wonderland.
On my last visit, there was an exhibit titled “Breakfast At Tiffany’s and The Little Black Dress”. 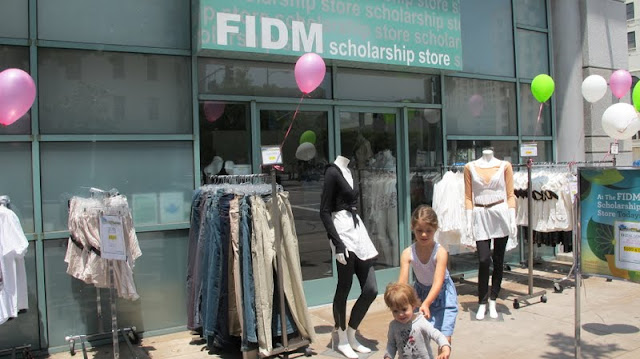 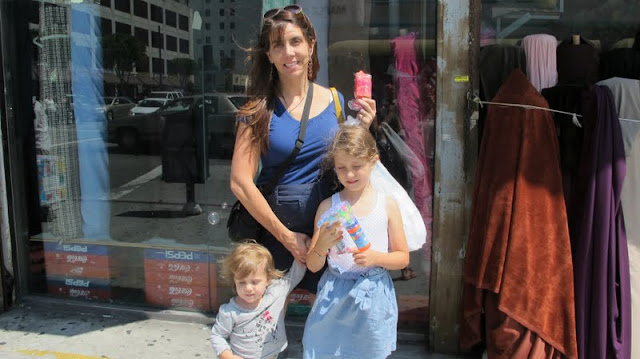 All stocked up on fabric and we also bought a balloon gun! Don’t forget to buy a fruit paleta when you visit. I bought Sandia this time, or watermelon.
Muy sabroso!
These country chicks had a great day.
To be honest I grew up ten minutes away from downtown. But it’s an exciting day for the mini country chicks who don’t go to the city very often.
Usually we go to Little Tokyo or Olvera Street nearby after I am done shopping to eat even more ethnic goodies or to buy much coveted Japanese school supplies.

Shopping for fabric trim in Paris