Today I’m taking part in a pattern tour! I made the Franklin Dress by the Brooklyn Pattern Company. It’s a new company created by designer Erin Proud, who worked as a theatrical costume designer for the ballet and opera but has switched gears since having children. And she lives in Brooklyn. Of course! Everyone cool and hip lives there. Or Portland.

I wanted to make a  dress to do Erin’s pattern proud, little old me in not so cool rural Ventura County. I planned to make the dress in a nice chambray or a Japanese double gauze fabric. That would be cool, right?

But Gigi had another idea. SHE would pick the fabric and SHE would style the shoot. Ummmm…… OK……

I have a hard time saying no to my little sweeties.

So I said yes to the kitty cat fabric and matching chevron baby cord fabric from Robert Kaufman .

We had spent the day in downtown LA. I had taken my little girls out of school for the day to attend none other than the HELLO KITTY exhibition at the Japanese Museum in Los Angeles. Yes, I consider Hello Kitty culture. I was actually a big collector as a child and would relish my trips down to Little Tokyo to blow my money on Hello Kitty erasers and pencils. 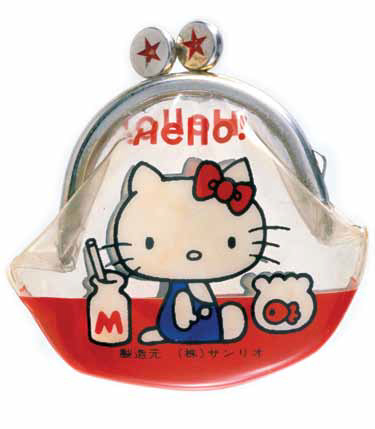 It was definitely worth playing hooky from school for the day. Ask me why I don’t home school anymore.

We had a great sushi lunch with my cousin and friends, and then mosied on down to the garment district to buy Lily some fabric for her Forest Fairy costume, and pick out some fabric for Gigi’s dress. At first, she had picked out some really crazy combos, think pink princesses and frogs, but then she saw this kitty cat fabric and I was like ,”Yes,” I can deal with that. So we bought it.

And do you know what? Gigi loves it! And so do I. I think I’ll start letting her pick her fabric for every project. Please don’t unfollow me.

Gigi’s working on her new pose. Not as iconic as Blue Steel, but close. Remember Zoolander?

A bit about the pattern:

The pattern was very well designed and the instructions are simple, even for beginners. I’ll admit I didn’t really look too closely, since this is an easy dress to make.

It has in seam pockets, a nice touch.

It has elastic casings in the 3/4 length sleeves.

It is SUPPOSED to have a really pretty tucked yoke. BUT, I accidentally sewed it with the tucked part facing inside but was too far along to stomach taking the whole thing apart. Duh.

Would you like to win a copy of the Franklin pattern. Fill out the form!
a Rafflecopter giveaway

Little girls dress made from a 1942 pattern and a men’s shirt.

A vintage tennis dress pattern from 1974