I didn’t know what a creative blog was in June of 2010.
I had started sewing again for my fourth baby who came along a bit later in my life. I had not touched my sewing machine much for about 15 years. A failed line of vests I had made in the nineties from thrifted mumu’s had hammered the nail on the coffin of my children’s clothing design dreams.
I had visited  a few sewing websites and I was very excited about this renewed passion of mine.
That specific day of which I am speaking, my 6 year old daughter was having a playdate at a schoolmates home. I was killing some time while my baby napped in her stroller at the Barnes & Noble magazine aisle when I saw a magazine called Artful Blogging.
I started to thumb through the magazine and I became instantly mesmerized by the stories from women who were writing and taking beautiful photographs, chronicling what seemed like fabulous, creative,and inspiring lives. I wanted to be one of those creative women doing something creative with my life, too!
I would start a blog!
But where was I to start? I didn’t even have a digital camera and could barely figure out how to upload a photo on the Kodak website! I didn’t have very good computer skills and used the web only for shopping and making travel plans. I would have to figure it out.
I bought my copy of Artful Blogging and another book called Blogging For Dummies and went home and immediately started visiting all of the blogs from the magazine. I opened up a Blogger account and chose Sew Country Chick as my name since I wanted to blog about life as a transplant to the country and I wanted to sew things. I have always had a love/ hate relationship with my blog name! I learned blog design, html, and how to take photos, and of course I am still learning.
Photography is so crucial to telling your story. All of my favorite blogs have one thing in common: great photos. This year, I invested in a DLSR, a Canon Rebel, and it has made a world of difference. I don’t know how I functioned without my 50 mm 1.8 f stop portrait lens. 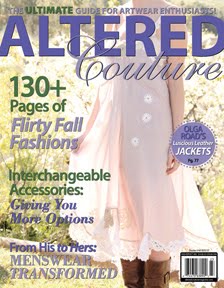 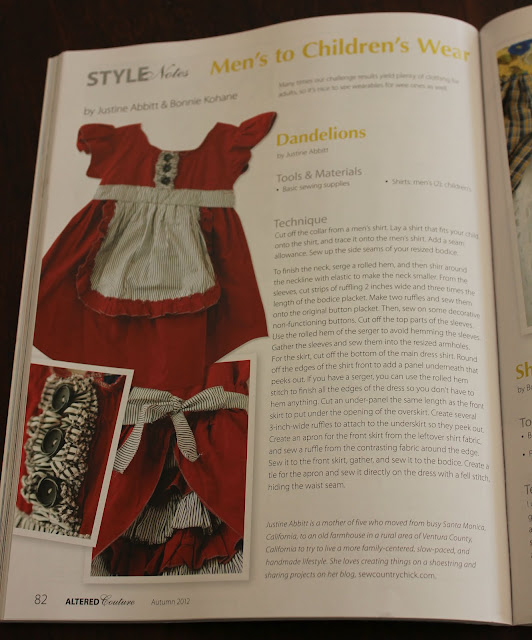 My Dandelion Dress
This past week was very exciting for me when I got my copy of Altered Couture in the mail with my dress featured inside.
Like Artful Blogging, Altered Couture is a Stampington Publication. These are thick, beautiful, and expensive magazines.
It was so exciting to see my Dandelion dress in the sister magazine that had first inspired me!
If you would like to be featured in Artful Couture too, they have a page on their website that explains their submission guidelines and deadlines. I sent them photos and then the clothing pieces they were interested in publishing. Hopefully I will get them back before Gigi outgrows them. 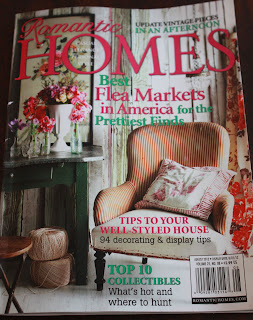 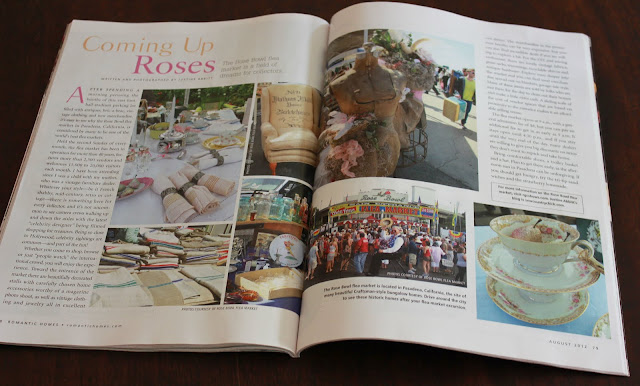 Last November I wrote and photographed a piece on the Rose Bowl Flea Market and submitted it to the editor of Romantic Homes Magazine. To my surprise, a few months later, the editor contacted me and told me they were going to publish my article in the July 2012 issue.
Yesterday I went to the bookstore and bought the magazine, expecting to see perhaps a condensed blurb. My article was on two full pages with all of my photos on it.
My 16 year old doesn’t get impressed easily but she showed all of her friends!
She actually thinks I ‘m cool now! 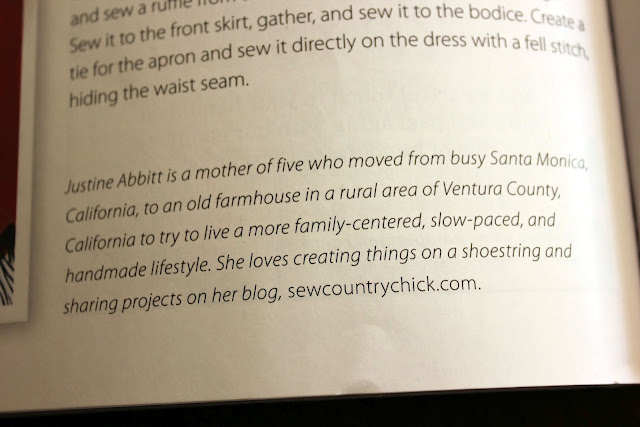 So how about you?
Was there a moment when you decided you were going to stop standing on the sidelines and just jump into something too?
Pin It

Are Your Blogging/ Real Life Out Of Balance?

Quitting the business of blogging