So my kids were sitting around  thinking about what they would do for Christmas presents for their relatives  today. My seventeen year old decided to make fudge for everyone which should be great since he’s an awesome baker, something  he rarely does anymore since having taken up the guitar…  My now newly minted eight year old was wondering what she should make and of course I had to come up with a sewn item for her. ” Pot-holders” I said,” that would be a perfect gift for your Grandmas and your Aunt and your big sister “.  Big sis has her own place now in the big apple and she actually cooks sometimes.
So I proceeded to cut out 12 pieces of square fabric and 24 pieces of flame resistant batting which I impulsively bought last Christmas thinking I would do the hot pad gift idea then. ( That’s how long it takes me sometimes to get around to  project ideas I have simmering on my back burner, and why am I so obsessed with pot-holders anyway?)
So along comes dd and looks at the whole project and decides maybe she’ll make the ribbon covered glass jars after all! ( See post below) So I guess know I’m going to be the one making pot-holders to give everyone . I probably would have ended up doing a lot of the work on them anyway. If you are anything like me when it comes to your kids then you probably dream up all these ambitious projects to do with y them and then end up doing about seventy per cent of the work. At first I thought it was a really lame idea to give everyone pot-holders to loved ones on my list but then I thought. “It’s the sort of thing you buy when you first get married or move to a new house and are obsessed with all those minute details and then years later you go to use this basic but totally necessary item and realize they are all cruddy and falling apart, and yay! That’s where my amazing homemade pot-holders will save the day!” 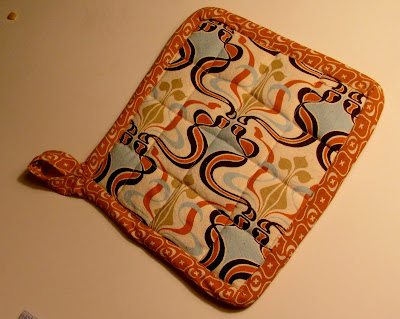 Later that night….
This is the third potholder I made. The first two were pretty wonky looking and I actually considered for a minute giving them to relatives and saying my daughter made them . I thought this was such a simple project I could just eyeball it but it turns out even the simplest things need a plan so here is a good pot-holder totorial from stitch in my side if you should be inspired to make one for a gift or spruce up your own kitchen. Happy sewing!