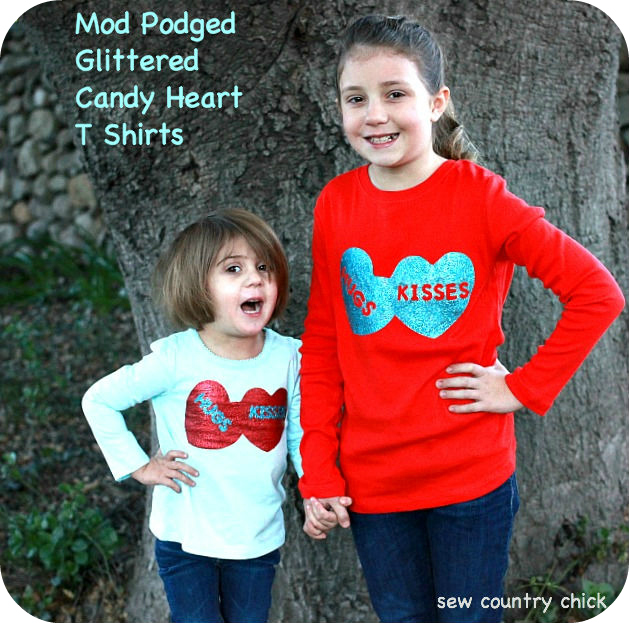 Does your child need something to wear TOMORROW to a school Valentine’s party and you are in a pinch?
Fear not…….
I have a fun and easy Valentine’s T- shirt tutorial for you today!
These are simple, plain T shirts that I jazzed up with some Mod Podge Fabric formula mixed with glitter.
If you saw these previously it may be because I posted them on Mod Podge Rocks last month for those people who actually start getting ready for Valentine’s Day a month early..
But for those of you, including myself, who whip out the cardstock, scissors, and glue the day before Valentoine’ Day to help your kids….
This is for you.

I downloaded the candy heart design from Silhouette Studio and used my electronic cutter to cut it out on inexpensive shelving paper. You can also print out a similar design from the internet, trace it onto the shelving paper, and cut it out with an Exacto knife if you don’t have an electronic cutter.
Shelving paper works great as a stencil because once you cut out your design, you peel the back off, stick it to the fabric, and nothing seeps under it. Plus, they have it at the dollar store!
Materials needed for the glittered heart t shirt project:
Mod Podge Fabric Formula
Fine ground glitter ( I used Martha Stewart brand)
Plain T shirts ( I bought mine at Target)
An electronic cutter OR a sharp Exacto knife
Shelving paper to create your stencil.
A paintbrush 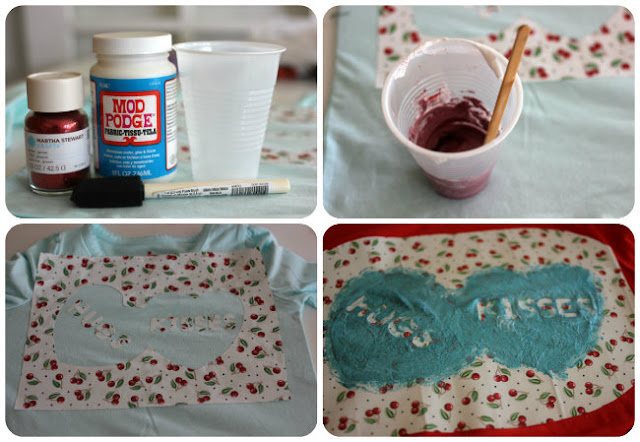 Once you have a heart design you like, you need to cut it out from the shelving paper either by hand with the Exacto knife or with your electronic cutter.
Mix equal parts Mod Podge Fabric with the fine glitter. I used Martha Stewart glitter. There are some really beautiful colors!
Remove the backing from the stencil and press it down firmly to the T shirt. If you have letters carefully press those down too.
The blue candy heart design was made by covering all of the exposed fabric with the blue gliiter/ Mod Podge combo. I made sure not to cover up the letters too much so I could peel them off, once the glue dried.

I used a slightly different method to make the red hearts. I covered the entire surface with the red/Mod Podge combo.
I let it dry then I placed the NEGATIVE of the stencil on top of the dried hearts and used the negative space to stencil in some blue/ glitter Mod Podge combo.
I would recommend washing the t shirts on the delicate cycle of your machine and then air dry them.