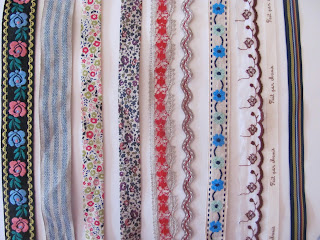 Some of the cotton trims I bought at Marche St. Pierre 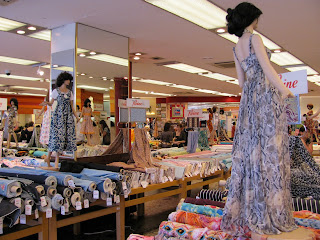 Reine a fabric shop at the Marche St. Pierre, in Paris’ textile shopping district in Montmartre 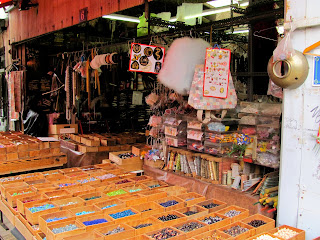 A button and trim stall in Les Puces de Saint Ouen , the Grande Dame of Paris flea markets.
Hunting down interesting fabric and trim shops was at the top of my list on my recent trip to Paris with my baby Gigi who turned one while we were there. My first stop was Les Puces at St. Ouen .There are many different markets that make up Les Puces which mean the fleas in French. While I spent all day there admiring all the furniture and French Industrial items and old signs which I am an avid fan, the only thing I bought were a tole leaf chandelier from the thirties which was going to be a challenge to fit in my suitcase and the ubiquitous french grain sack with the two red stripes going up the center which you are seeing more and more of nowadays , especially on pillows.There were many beautiful trim shops but most of the trims I liked were about 10 euros a meter which is about 12 dollars a yard , a real budget buster since I might use a few yards on a little girls’ dress. This is one of Paris’ most expensive markets as it is so popular with tourists.
The next day we took the bus up to Montmartre, and at the foot of the Sacre Couer Church is the Marche St. Pierre a paradise for fabric shoppers. Though none of the fabric there is vintage they have an amazing selection. The two biggest shops Reine and Dreyfus are both several stories high and jam packed with every kind of fabric and trim you can imagine. One of the best deals was the Liberty of London Fabric which sells for about 40$ a yard in the US. It’s 20 euros a yard there, about 24$ There is also a beautiful assortment of pure cotton trims which I have a hard time finding in the US. Most trims available here are polyester. I bought some coated cotton in a French style stripe for a tablecloth outside and some dishtowel fabric which actually sells by the yard. I plan to make some cute placemats with it.

Shopping The World For Fabric, Paris!

Using up my fabric stash