So making this wedding dress has at times made me  question my sewing skills in a big way. But I’ve had a great time and I would probably do it again. I especially enjoyed the fittings with Maria and her beautiful sisters and mother. Their home is like  a modern day version of Little Women. They don’t own a TV, instead listening to opera music or reading classic novels together in the living room in front of the fireplace.
This project has been a humbling experience, from not making the lace overskirt correctly and messing up the lace applique seams on it, to making a lopsided sash and sewing on the buttons crooked. A crash course in couture sewing. First we couldn’t find any patterns that looked like the dress Maria wanted so I had to make my own pattern and make sure all the little things like armholes and princess seams and bias skirt seams were all lined up correctly. That took about three muslins to do. Then I had the fiasco with the lace overskirt being too baggy. Thank god I had enough lace left to drape the skirt on top of the bias skirt making it much more fitted. I used the old skirt front for the train and I had just enough of the border left to apply around the edges. Then there was about 8 to 10 hours of racking my brain over how to make a sash look like the Oscar De La Renta dress which was impossible since I didn’t have a good close up photo to study or directions on how to do this type of pleating.
Just remember…. making a wedding dress the first time is like remodelling your house. It takes twice as long as you think it will!
Well, I wouldn’t give up on the pleated sash idea so I posted a desperate plea on the wedding sewing boards of patternreview and an angel by the name of Susiestitcher came to my rescue and linked me to this tutorial at Project Run and Play and I finally figured it out. Third times the charm I guess. I have to say without those boards at patternreview I would have been lost because the wedding contruction book I have is from 1993 and didn’t have enough information about a lot of things. Here some some photos of my progress: 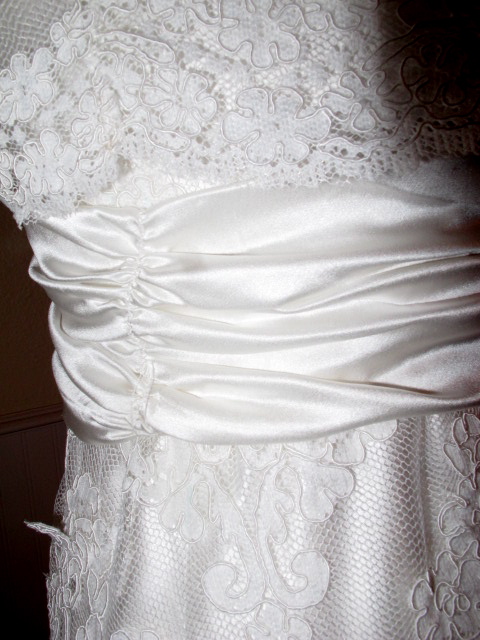 The first sash I made. I thought is was tacky. Looks like a cheap prom dress. 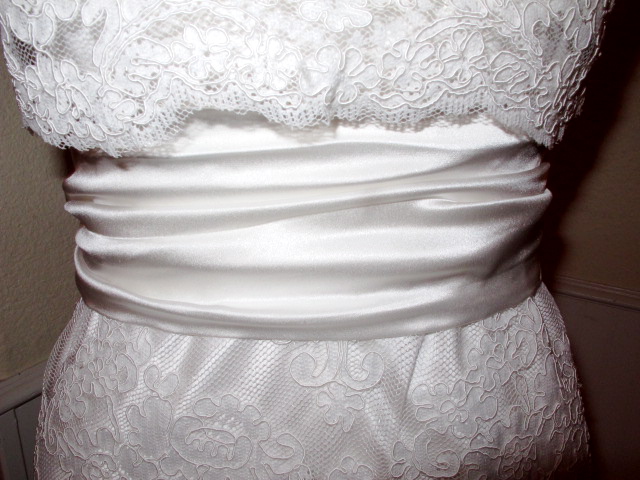 If I worked with this shirring technique for awhile I may have succeeded with this. 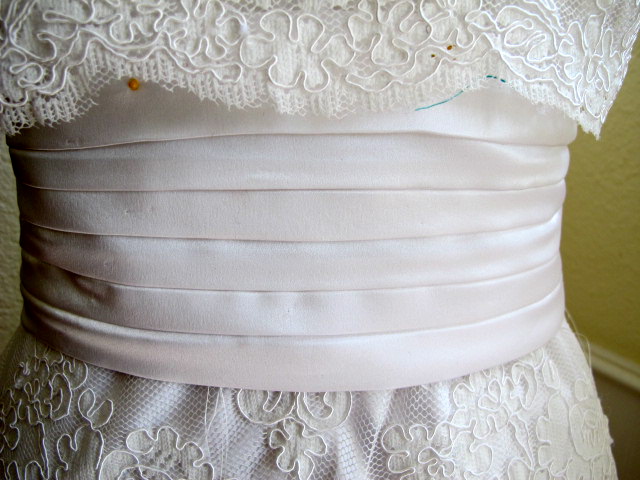 Here was the second sash. The pleats looked good at first… 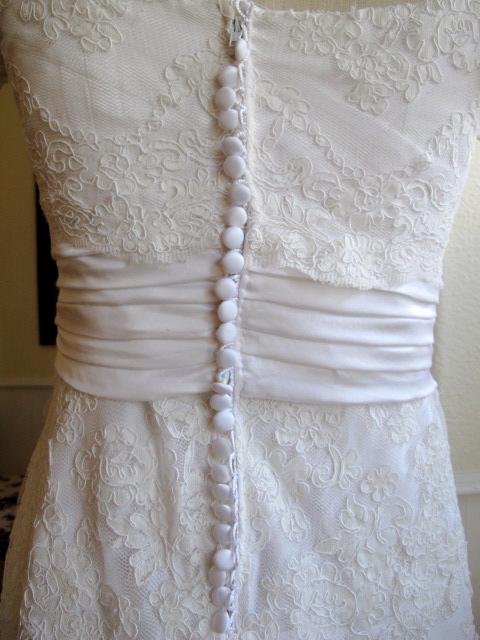 But they didn’t line up in the back and look at those buttons! It looks like I was drunk when I did it! I can laugh about it now, but I can assure you I was almost in tears at this point. I had to remove the sash and in doing so, remove the buttons and zipper to redo the whole thing. 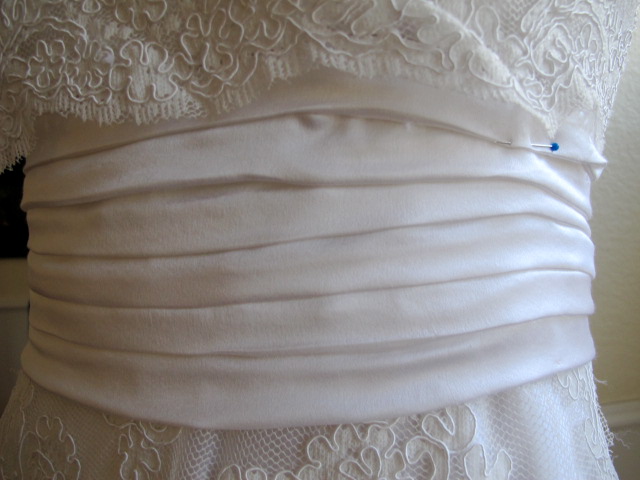 Here is that last sash after being on the dress form for a day. As you can see the pleats have taken on a sad, lopsided air to them. 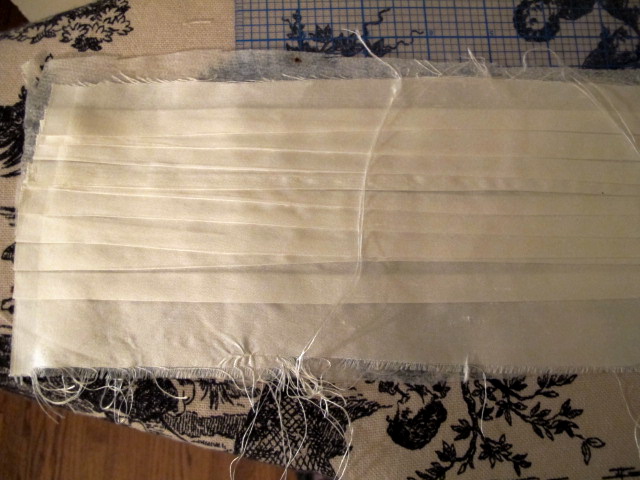 Here is the method I learned last night from the Project run and Play tutorial. I ironed the pleats down like I did the first time. Last time I stitched each pleat down which gave the whole thing an overworked look. This method was a lot easier. I started with silk three times the width I wanted to end with. 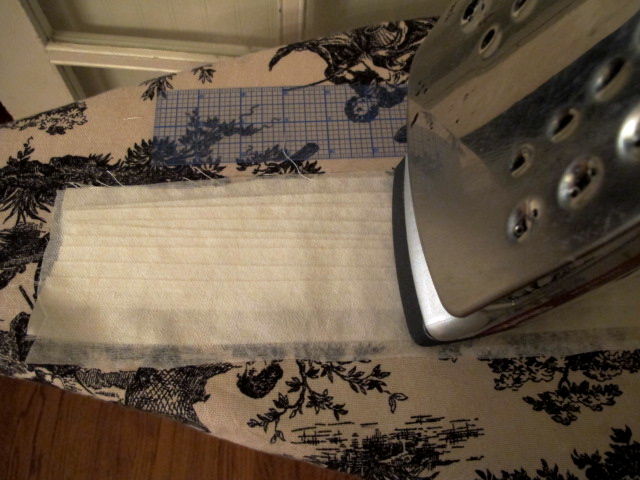 When i finished ironing, I  flipped the whole piece and ironed on some interfacing to the wrong side, making sure the sticky part was facing the fabric. I trimmed the interfacing to size. This keeps all the pleats glued down. 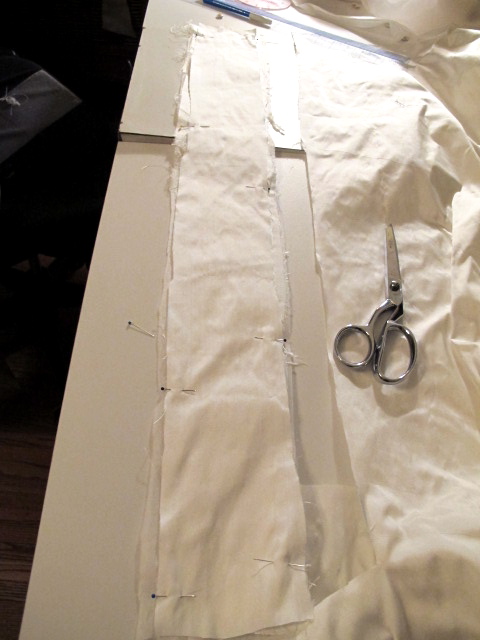 I cut another piece of the same fabric the same size as the finished sash and ironed it right side to right side, leaving the end open so I could attach it to the back of the dress. Flip it right side out again and press. 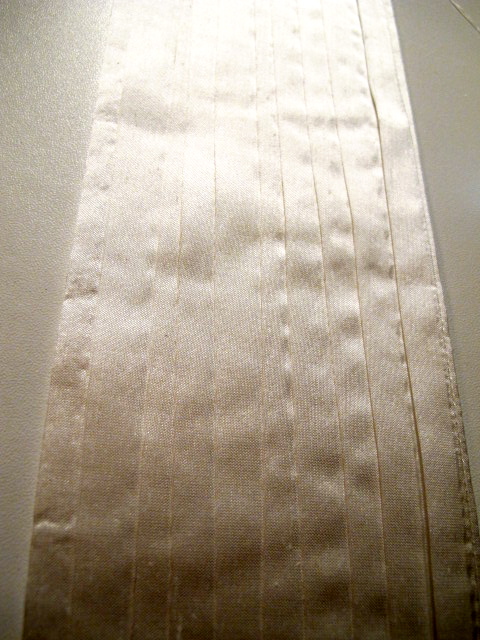 Here is the result. 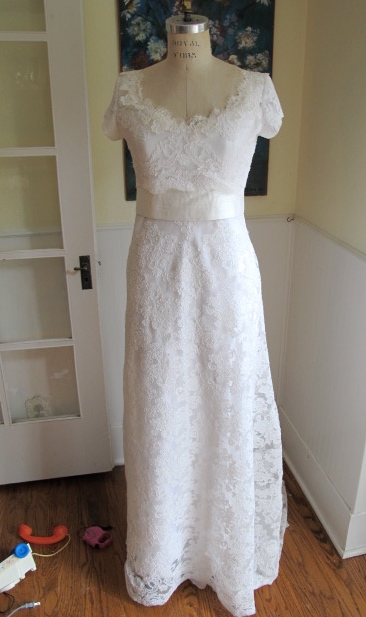 This is the dress after re-draping the front skirt which was too big before because I used the pattern and didn’t drape it over the bias skirt instead. 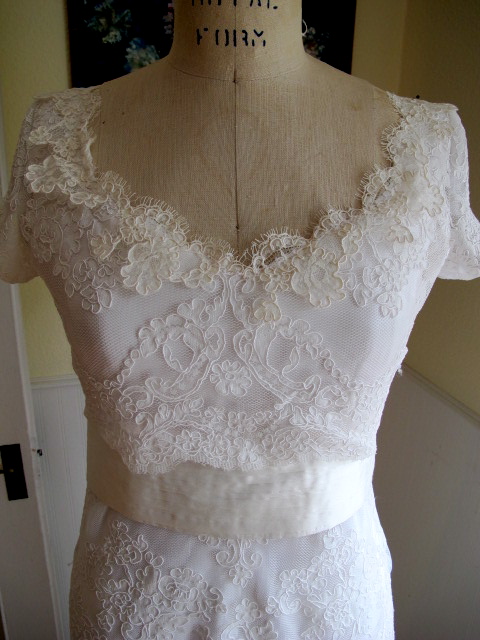 Her is the new sash and the appliqued neckline. I added a different trim there. 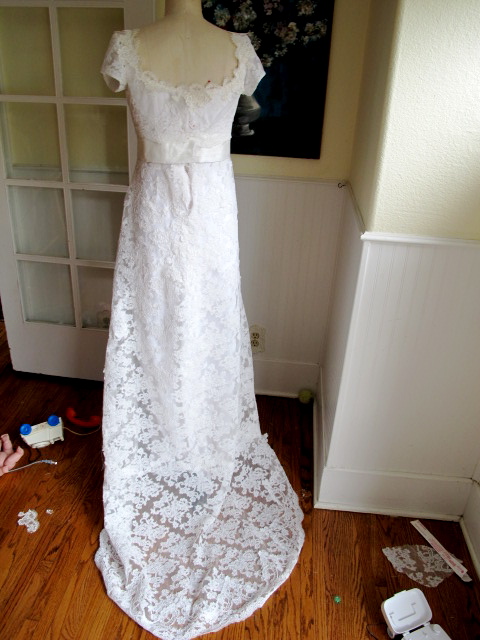 I used the old front piece of the skirt to make the train. Note the Fisher-Price telephone on the floor. And how I keep this dress clean with a one year old around? I throw a white sheet over the whole thing and pray nothing happens! 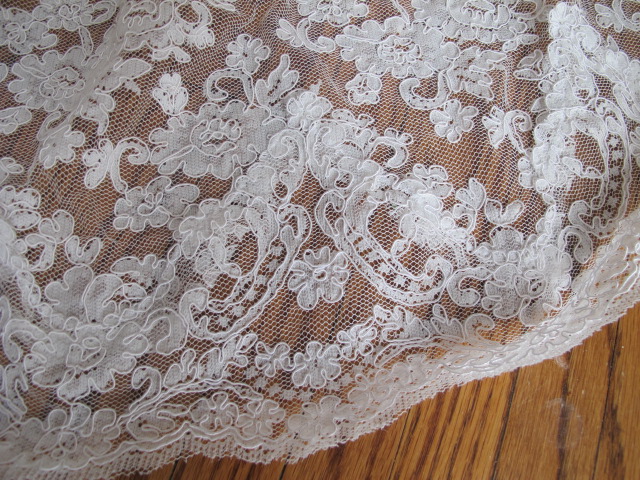 I appliqued  the border pieces to the bottom hem and train. I’m considering adding a horsetail trim to the underside so the lace has more body on the bottom.

So the next steps are reinstalling the lapped zipper and buttons and loops. I also have to trim the sleeves and hem the underskirts.

Adding A Lace Overlay To A Strapless Wedding Gown:Thread tracing and applique seams on lace